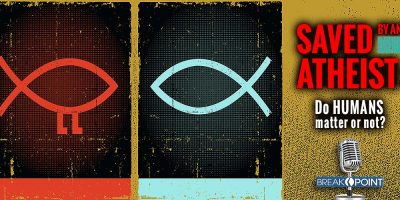 June 9, 2017 – Eric Metaxas  Find out how a famous atheist started a secular humanist on the road to faith in Jesus Christ.

Sarah Irving-Stonebraker was on the fast track to academic stardom. A native of Australia, Sarah had won the University Medal and a Commonwealth Scholarship to undertake her Ph.D. in History at King’s College, Cambridge.

Sarah’s secular humanist perspective fit right in at King’s, and her views of Christians—that they were anti-intellectual and self-righteous—seemingly were confirmed.

Yet, as she details in an eye-opening testimony from the Veritas Forum, a strange thing happened to Sarah inside her secular bubble. Somehow, the truth got in. After Cambridge, Sarah said she attended some lectures at Oxford by the atheist public intellectual and Princeton ethics professor Peter Singer.

Singer, as you probably know, has stirred worldwide controversy by advancing the notion that some forms of animal life have more worth than some human life. Singer doesn’t believe in God, and therefore he sees no basis for any intrinsic human dignity.

During the Oxford lectures, Singer asserted that nature provides no grounds for human equality, pointing to children who have lost their ability to reason through disability or illness. Sarah Irving-Stonebraker’s comfortable secularism was suddenly rocked.

“I remember leaving Singer’s lectures with a strange intellectual vertigo,” Sarah writes. “I began to realise that the implications of my atheism were incompatible with almost every value I held dear.”

A few months later, at a dinner for the International Society for the Study of Science and Religion, Andrew Briggs, a Professor of Nanomaterials and a Christian, asked Sarah a perfectly reasonable question: Do you believe in God? Again, Sarah was flummoxed, fumbling something about agnosticism. Briggs replied, “Do you really want to sit on the fence forever?”

“That question,” she now says, “made me realise that if issues about human value and ethics mattered to me, the response that perhaps there was a God, or perhaps there wasn’t, was unsatisfactory.”

Fast forward to Florida, where Sarah was conducting research. She began attending church as a seeker: And she was overwhelmed by Christians living out their faith:  “feeding the homeless every week, running community centres, and housing and advocating for migrant farm laborers.”

And when she started reading the likes of Paul Tillich and Reinhold Niebuhr, she saw the intellectual depth and profundity of their Christian faith. Then this: “A friend gave me C.S. Lewis’s Mere Christianity, and one night,” she wrote, “I knelt in my closet in my apartment and asked Jesus to save me, and to become the Lord of my life.”

Sarah’s journey from doubt to faith reminds me a little of another formerly atheist denizen of Cambridge and Oxford—C.S. Lewis. Lewis saw the bleak implications of his worldview, stating, “Nearly all I loved I believed to be imaginary; nearly all that I believed to be real, I thought grim and meaningless.” And just like Sarah, Lewis had good, well-informed Christian friends and colleagues such as J.R.R. Tolkien to point a disillusioned atheist gently to Christ.

As Chuck Colson would say, while there are many good ways to share the good news with people, even scholars, one is to help them follow their worldview assumptions to their logical conclusion. The fact is, the grim, atheistic worldview simply can’t carry the weight of human significance on its bony shoulders.

Created in the awesome image of God, men and women know that life has a meaning beyond “eat, drink, and be merry, for tomorrow we die.” People everywhere see the True, the Beautiful, and the Good and long to know their source. And, thank God, He has revealed Himself!