Julio Acuna, Director of CBMC Latin America shares his insight:
It is a pleasure to share with you that the 4th Latin American Convention “Transformational Connections” held November 3-5 in Valencia, Venezuela was a success, even in the midst of difficulties across the country. We had the wonderful opportunity to hold such an important event to bring hope to the professional and business community not only in Venezuela but in Latin America in general.

The opening session was attended by 130 people, including a special representation of important guilds and living forces of the city of Valencia: Chamber of Industry, Chamber of Commerce, Fedecamaras, among others. We also had the valuable participation of speakers, workshops and participants from different countries that gave a truly continental tone to the event. These included: Araya from Chile, Edgar Medina from Mexico, Julio Cesar Acuña from Ecuador, Christyan Perez from Paraguay, José de Dios representing Generosity Path from the United States, and a special representation of Venezuela with Jesus Sampedro, Arnoldo Arana and Abraham Figuera. Likewise, we had the assistance of active members and eight newly incorporated cities in the CBMC family, including Valencia the host city of the Convention.

We had the opportunity to hear testimonies from businessman whose lives have been transformed resulting in the success of both their companies and their families. Among them was Javier Barcia, president of EcoPacific, a family business leader in the innovative elaboration and distribution of natural juices in Ecuador.

We also heard the story of Verlo Araya, an icon of the Government of Chile for the national promotion of entrepreneurship based on the success of its company CFruit, which distributes 50% of the fruits in northern Chile. In addition the conference was a point of connection and networking. Young Professionals and businessmen had the opportunity to attend as scholarship holders and rethink their future.

During the two days we had the opportunity to participate in the Generosity Path Workshop hosted by José de Dios, the representative for this ministry in Latin America.

Young professionals from Venezuela and Ecuador met for a relaunch of Young CBMC of Latin America.

Before the Convention, the Latin Board met with representatives from Ecuador, Mexico and Venezuela, accompanied by online participation from other countries.

Each of the convention participants have committed to open a new committee in the next 12 months and to disciple two people. “One will become thousand” Isaiah 60:22.

It was an event marked by the valuable effort and support, affection and dedication of directors, staff and members of CBMC; motivated by the desire to continue to spread the work of CBMC and to speak hope in Jesus Christ to all in their marketplace. We hope to continue working together to build a transformed Venezuela and Latin America. 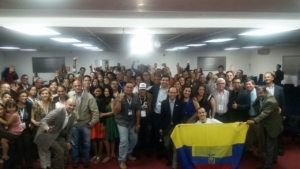