CBMC Finland Young Leader Andrei Nahkala is standing in the European Parliament elections in May 25th.

Andrei joined the first Young Leaders Group in Finland in the autumn 2006 as a young student of Marketing at the Helsinki School of Economics. Today he has two master’s degrees, in Economics and in Political Science.  He hahas been a faithful member of his YL group for almost 8 years.

Andrei stepped (or was dropped?) into the politics quite suddenly, within a week in 2010, when one of the MPs in the Parliament of Finland, a Christian Democrat, needed an assistant. Since then he has worked as secretary-general in the Parliamentary group’s office, as Special Adviser to the Minister of the Interior and now as State Secretary at the age of 29 years!

“To the faithful you show yourself faithful, to the blameless you show yourself blameless” (2 Samuel 22:26) “The Lord will make you the head, not the tail. If you pay attention to the commands of the Lord your God that I give you this day and carefully follow them, you will always be at the top, never at the bottom.” (Deuteronomy 28:13)

Photo: Andrei Nahkala interviewed with the other candidates of Christian Democrats April 26th 2014 by Board Member of Europartners Kristiina Drotár, who is presently assisting MEP Sari Essayah.christiandemocracts

Business as mission: How is business penetrating China's vast unreached populations with the Good News?

The Neglected Virtue of Hard Work

Ethics or 'Ethos' — Our Home

Thanksgiving: Not a Game of Comparisons 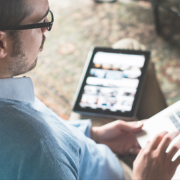 Don’t Be Proud of Your Busyness