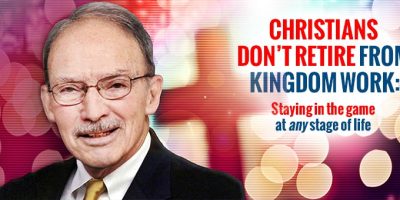 March 22, 2017 – John Stonestreet   Staying In The Game At Any Stage Of Life!  Narrowly escaping the jaws of a large reptile might get you thinking about your life. But you don’t have to wait ‘til then to make important changes.

C. S. Lewis wrote that pain is God’s megaphone—something He uses when He can’t get our attention any other way. I know at least one Christian who has an idea of what that’s like: God got his attention after—and I’m not making this up—he was nearly eaten by a crocodile.

Bill Beattie was a businessman whose life was going quite well. He’d been happily married for 35 years, and his three children were leading productive lives. He expected to spend the years ahead peacefully serving as an elder in his church in Danbury, Connecticut.

But God was prompting Bill toward other things. Problem was, Bill wasn’t listening. That changed after a canoeing adventure on the Zambezi River, home to hippos and crocodiles, during an anniversary trip to Africa with his wife Kathie. Bill recalls, “I was a novice canoeist and had foolishly rejected Kathie’s suggestion of canoeing lessons prior to the trip.” The guide gave them a five-minute training session, and sent the couple paddling away, headed downstream. They were “eyeball-to eyeball with hippos at every turn,” Bill recalls. The expression on Kathie’s face told him that his wife was terrified.

And she was right to be. They suddenly struck a submerged tree trunk and capsized the canoe. The rescue team quickly picked up Kathie, but their canoe could not hold another person. Bill tried to right his own canoe and climb on top of it as the crocodiles watched.

Struggling with his canoe, Bill didn’t notice, but his companions did, that a 13-foot crocodile came within 10 feet of him before turning and pursuing some of the flotsam from the canoe that had gone floating down the river.

Around the campfire that evening, Bill reflected on what had happened that day. It was extraordinary, he says, “that the croc did not attack and drag me to the bottom. I sensed that God had intervened on my behalf to save me for His purposes.”

Back home, Bill began to consider his areas of strength, and consulted with friends. Believing God was leading him to start a ministry for at risk, inner-city boys, he founded the Pathways Danbury, a mentoring ministry which now reaches girls as well. Christian adults provide them with one-on-one mentoring, Bible study, and tutoring. They can attend Bible camp in the summer, and if they graduate from high school meeting standards of excellence, they’re given a grant for education, business, or housing.

The key to their ministry, Bill notes, “continues to be sharing Jesus on a long-term basis to kids who are at risk for drugs and alcohol . . . delinquency and family instability.”

Now frequently on BreakPoint, we like to share stories of Christians like Bill who are making a difference in the world by tackling the brokenness in their own backyard. We do this to remind us that all is not lost… that God has his people everywhere, enlisting them in his Kingdom work to make all things new. And if God is at work there, He’s at work around you too.

Bill’s story also reminds me how much Chuck Colson hated the idea that retirement is about spending the rest of your life on the golf course. He would have none of that. Christians don’t retire from Kingdom work, he’d often say.

But there’s no need to wait until you’re nearing retirement: God has placed you where He has for a purpose right now.