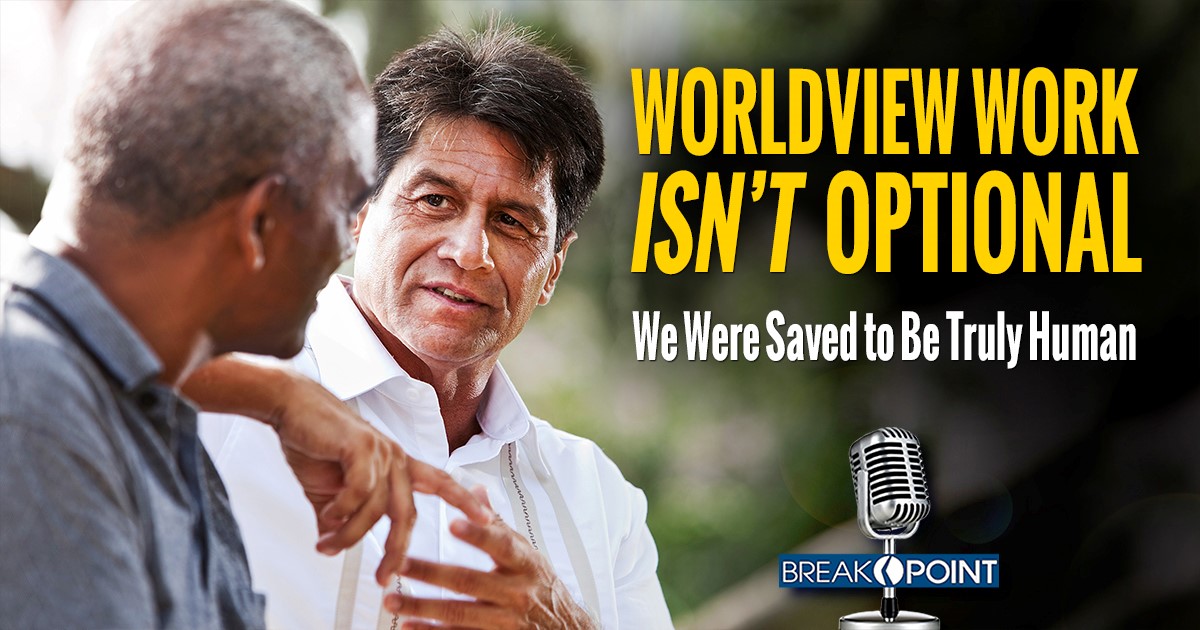 Leave a comment April 23, 2018 • Featured Blog
Work Isn’t Optional We Were Saved to Be Truly Human

John Stonestreet – Some are saying that Christians have lost the culture. But what if it was never a war to win, instead it was a calling to embrace?

If there is an overarching theme for BreakPoint—starting with Chuck Colson and now with Eric and me—it’s culture. Specifically, how Christians can understand it, engage it, confront it, even restore it—through the clarity of a Christian worldview.

As Brett Kunkle and I explain in our book, “A Practical Guide to Culture,” what we mean by culture is not some mysterious thing cloistered in art museums. No, culture is the sum of everything we as human beings create, write, say, do, and think—the marks we leave on our world.

In that sense, “engaging the culture” isn’t really optional. It’s human. It’s as much a part of being alive as breathing is. We don’t decide whether we’ll engage the culture. Just how.

I say this because lately, a few people have suggested that Christian efforts in the culture have failed. One gentleman recently wrote me saying that worldview-style training like the kind we do just hasn’t worked. We’re losing the next generation, he said, and mainstream culture is as dark as ever.

But I want to push back against this idea, at least on a couple of fronts. First, it just isn’t true! You can’t convince me that the work of people like Francis Schaeffer, Chuck Colson, David Noebel, or the work of groups like Summit Ministries or the Colson Center, teaching Christians how to approach culture from a Christian worldview hasn’t made a difference. I’ve seen young faces light up when they get this Christianity thing for the first time, realizing it’s true, and that faith relates to culture. I’ve seen too many to believe that it hasn’t made an impact. I was one of those faces in 1994.

And stats back me up on this. Far from the doom and gloom we often hear in the media, and from Christian sources, the Church isn’t collapsing in America. In fact, evangelicals have one of the highest retention rates of their young people of any Christian group.

And to say that “worldview hasn’t worked” is to ignore the incredible inroads made in the academy in our lifetime. Consider that the entire discipline of philosophy was flipped on its head in the late 20th century by people like Alvin Plantinga. Consider the amazing progress in law, not only now, but the seeding of jurisprudence by the folks at Alliance Defending Freedom. Consider the gains of the pro-life movement. All of these were either directly or indirectly inspired by Christians taught to engage culture armed with Christian worldview thinking.

Now don’t get me wrong. I’m under no illusion that things are going great in the culture. No, Christians are facing incredible challenges around the world. And in Western culture, it’s all but lost any sort of privileged position it once had.

But here’s the kicker: we don’t teach worldview or champion the idea that Christians should “engage culture” because it “works.” It’s not a strategy, folks. We do it because we’re redeemed human beings, and because redemption is in line with, not opposed to, our created purpose.

Christians shouldn’t make art, write literature, compose music, build businesses or any of these things to win a kind of war against secularism. We do these things because they’re part of what it means to be truly human. And that’s what Jesus saved us to be—fully human worshipers of God with all of our lives.

So yes, the worldview movement and its emphasis on culture has made a difference. I know the beneficiaries by name. But we don’t teach worldview or engage culture for strategic purposes. We do it because Christianity isn’t Christianity without it.

As Chuck Colson would often say, Christians are to “make the invisible kingdom visible.” We do just that by intentionally engaging the culture around us in every sphere of life God has called us to.