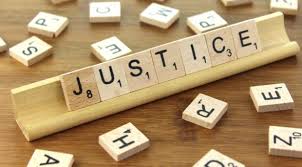 One of the more memorable lines written by C. S. Lewis has to do with whether or not a sense of morality is innate to human beings.

“Whenever you find a man who says he does not believe in a real Right and Wrong, you will find the same man going back on this a moment later. He may break his promise to you, but if you try breaking one to him, he will be complaining, ‘It’s not fair’ before you can say Jack Robinson.”

Our culture in particular is full of demands for justice of all kinds: social justice, economic justice, LGBTQ justice, environmental justice, racial justice, even “reproductive justice.” At the same time, it’s not always clear what is meant by justice. Too often, demands for justice are undergirded by radical and idiosyncratic about right and wrong, about fairness, about the human person, and—thanks to the wide application of critical theory—about power dynamics.

Demands for justice may be getting louder and louder, but that doesn’t mean we are making progress as a society. The only worldview framework solid enough to ground human dignity and justice in human history is Christianity. True justice is a matter of honoring God and honoring the image of God inherent in every human person, and is grounded in God’s love for humanity, our love of God, and our love of neighbor.

Too many Christians, rightly concerned by words like “justice” and “social justice” being wrongly used, have abandoned them altogether. I’ve heard from many of them, and, while I share the concern about the wrong worldviews being smuggled into the Church and culture through these words, we must not abandon ideas that belong to God. “He has told you, O man, what is good; and what the Lord requires of you, to do justice, to love mercy, and to walk humbly with your God,” wrote the prophet Micah. In Matthew 7:12, Jesus said, “Whatever you wish that men would do to you, do so to them; for this is the law and the prophets.”

In his book, Dr. Thaddeus Williams writes, “The problem is not with the quest for social justice. The problem is what happens when that quest is undertaken from a framework that is not compatible with the Bible. Today many Christians accept conclusions that are generated from madness machines that are wired with very different presuppositions about reality than those we find in Scripture.”