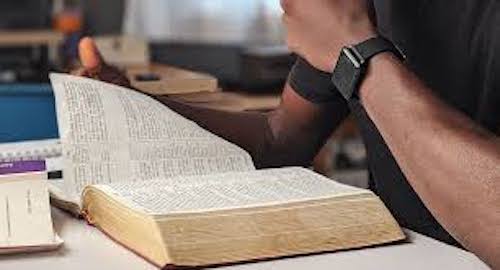 Years ago, I published a book called Business at Its Best: Timeless Wisdom from Proverbs for Today’s Workplace. Compiled from a series of Monday Manna meditations I had written over several years; my goal was to present a wealth of principles from the Bible that apply to the 21st century marketplace. Response to the book was mostly positive. Both individuals and groups of business and professional people have used it for personal reflection and discussion.

I did receive a few critical comments, however, from readers who complained the writings were not focused enough. Maybe they were looking for answers for specific problems or issues they were facing. However, as it is for Monday Manna every week, our desire is to present the timeless, practical relevance of the Scriptures for the workplace and remind us that from God’s perspective, all work is sacred.

The Bible does not give specific answers to questions like “Which job should I take?” or, “How can I get our supplier to be more responsive?” But it does provide basic, essential principles for how we should conduct ourselves in the marketplace. I was reminded of this recently when a friend whom I will call Jim told of an extremely difficult situation he was confronted with years ago.

He was a quality control inspector for a government-supported utility, assigned to inspect plants strictly according to detailed specifications. “Close enough” was not acceptable. His diligence, however, was not appreciated by the managers and supervisors at the plant. He was pressured to overlook equipment that did not meet code requirements. He even received death threats.

Jim endured the intense opposition for three years – fulfilling his duty to fully enforce regulations – until he transferred to another plant. Three years later he was reassigned to the original plant, finding that the working environment there had changed dramatically. All of the managers that opposed his ethical commitment had been dismissed, and meticulous inspections were welcomed by the new leadership.

If you were to ask Jim if the Bible spoke specifically to the challenges he had faced, he probably would tell you no. But he did know that as a follower of Jesus Christ, compromising and covering up design failures were not only unacceptable, but also a poor witness to his faith. Here are just a few of the biblical principles he boldly defended:

God puts a high premium on honesty. Temptations are many in the marketplace to shade the truth, but God always expects honesty and forthrightness. “The Lord abhors dishonest scales, but accurate weights are his delight (Proverbs 11:1).

Dishonesty eventually will be exposed. It was no coincidence that Jim was restored to his former role, while those who insisted that he be deceptive in his reporting had been removed from their jobs. “Truthful lips endure forever, but a lying tongue lasts only a moment (Proverbs 12:19).

There is security in maintaining personal integrity. Jim did nothing personally to expose those who had opposed him, but their determination to deceive was discovered, nevertheless. “The man of integrity walks securely, but he who takes crooked paths will be found out” (Proverbs 10:9).

© 2022. Robert J. Tamasy has written Marketplace Ambassadors: CBMC’s Continuing Legacy of Evangelism and Discipleship; Business at Its Best: Timeless Wisdom from Proverbs for Today’s Workplace; Pursuing Life with a Shepherd’s Heart, coauthored with Ken Johnson; and The Heart of Mentoring, coauthored with David A. Stoddard. Bob’s biweekly blog is: www.bobtamasy.blogspot.com.