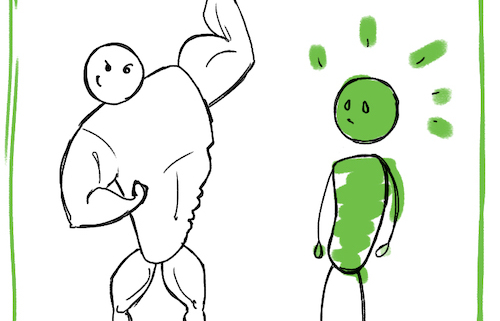 Comparison is a dangerous game to play. Because we are all unique. Some people have abilities and traits we wish we had. Would it surprise you to discover that those same people are envious of abilities and traits that you have? But I suppose it is normal to wish we were different – I know I have done that.

For instance, I can recall times wishing that I was taller. Or that I had a better memory. Some people might wish they had different family members, or that their background experiences were different. Do you wish your self-control was better, so you would not keep repeating the same limiting and/or destructive behavior? I have lost count of the times I wished I could stop making the same mistakes.

This morning I was reading from one of my daily devotionals, one called JESUS CALLING, and saw this verse: “But who are you, a human being, to talk back to God? Shall what be formed say to the one who formed it, ‘Why did you make me like this?’ Does not the potter have the right to make out of the same lump of clay some pottery for special purposes and some for common use?” (Romans 9:20-21).

Then, I received a reminder of how much grace I have been given by God – His limitless, unconditional, unmerited favor – and how much grace I continue to need on an everyday basis. I read the following thoughts below from the late Henry Blackaby, author of the excellent Bible study, Experiencing God. He started by quoting a passage I have read many times:

Even though we might sometimes wish we were different, each one of us is a product of God’s perfect, divine plan. How we are – and who we are – is not a mistake.

Blackaby continued to elaborate on what this means: “Your life is a part of God’s grand design. God has known about you and had a plan for your life since before time began. He knew everything about you before you were even born.” He then cited a verse that continues to amaze me, Jeremiah 1:5, “Before I formed you in the womb I knew you, before you were born, I set you apart….”

“God predetermined that you would become like His Son. Your life, therefore, has a destiny. Christ is the model upon which the Father is developing your life. You are meant to have a relationship with the Father that is as intimate as the relationship between Jesus and the Father (John 17:21). Every event He allows into your life is designed to make you more like Christ.

“God’s call came when He invited you to join Him in the process! His call was extremely personal, designed specifically for your response. How wonderful to realize that at a particular moment in history, almighty God spoke personally to you and invited you to become His child!”

No matter what our job might be – as a top executive, manager, supervisor, retail salesperson, craftsman, educator, musician, engineer, attorney, physician, developer, technician, or some other profession – we are much more than the kind of work we do. As Romans 8:29 declares, we are predestined by God “to be conformed into the likeness of His Son,” Jesus Christ. More than anything, when people see us, God wants them to see Christ. And being different is how He enables people to see Him in different ways.

Ken Korkow lives in Omaha, Nebraska, U.S.A., where he serves as an area director for CBMC. This is adapted from his “Fax of Life” column. Used with permission.