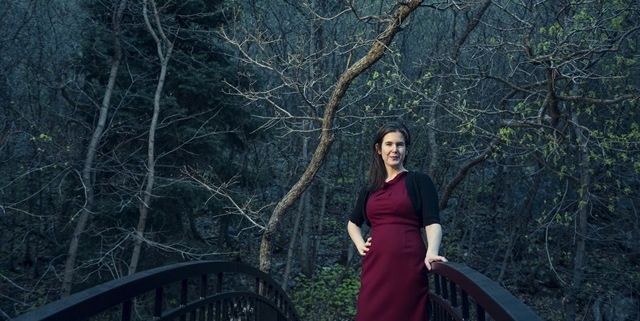 Nicole Cliffe — I became a Christian on July 7, 2015, after a very pleasant adult life of firm atheism. I’ve found myself telling “the story” when people ask me about it—slightly tweaked for my audience, of course. When talking to non-theists, I do a lot of shrugging and “Crazy, right? Nothing has changed, though!” When talking to other Christians, it’s more, “Obviously it’s been very beautiful, and I am utterly changed by it.” But the story has gotten a little away from me in the telling.

As an atheist since college, I had already mellowed a bit over the previous two or three years, in the course of running a popular feminist website that publishes thoughtful pieces about religion. Like many atheists (who are generally lovely moral people like my father, who would refuse to enter heaven and instead wait outside with his Miles Davis LPs), I started out snarky and defensive about religion, but eventually came to think it was probably nice for people of faith to have faith. I held to that, even though the idea of a benign deity who created and loved us was obviously nonsense, and all that awaited us beyond the grave was joyful oblivion.

I know that sounds depressing, but I found the idea of life ending after death mildly reassuring in its finality. I had started to meet more people of faith, having moved to Utah from Manhattan, and thought them frequently charming in their sweet delusion. I did not wish to believe. I had no untapped, unanswered yearnings. All was well in the state of Denmark. And then it wasn’t.

What I Already Knew
There are two different starting points to my conversion, and sometimes I omit the first one, because I think it gives people an answer I don’t want them to have. It is a simple story: I was going through a hard time. I was worried about my child. One time I said “Be with me” to an empty room. It was embarrassing. I didn’t know why I said it, or to whom. I brushed it off, I moved on, the situation resolved itself, I didn’t think about it again. I know how people hear that story: Oh, of course, Nicole was struggling and needed a larger framework for her life! That’s part of the truth, but it’s not the whole truth.

The second starting point is usually what I lead with. I was surfing the Internet and came across John Ortberg’s CT obituary for philosopher Dallas Willard. John’s daughters are dear friends, and I have always had a wonderful relationship with their parents, who struck me as sweetly deluded in their evangelical faith, so I clicked on the article.

Somebody once asked Dallas if he believed in total depravity.
“I believe in sufficient depravity,” he responded immediately.
What’s that?
“I believe that every human being is sufficiently depraved that when we get to heaven,
no one will be able to say, ‘I merited this.’ ”

I should say here I am a happy, even-keeled soul. If this were the Middle Ages, I would be in a book under the heading “The Four Humors: Sanguine/Phlegmatic.”

Therefore, it was very unsettling to suddenly feel like a boat being tossed on the waves. I wasn’t sad, I wasn’t frightened—I just had too many feelings. I decided to buy a Dallas Willard book to read anthropologically, of course. I read his Hearing God. I cried. I bought Lewis Smedes’s My God and I. I cried. I bought Sara Miles’s Take This Bread. I cried. It was getting out of hand. You just can’t go around crying all the time.

At this point, I reached a crossroads. I sat myself down and said: Okay, Nicole, you have two choices. Option One: you can stop reading books about Jesus. Option Two: you could think with greater intention about why you are overwhelmed by your emotions. It occurred to me that if Option Two proved fruitless, I could always return to Option One. So I emailed a friend who is a Christian, and I asked if we could talk about Jesus.

I instantly regretted sending that email and if humanly possible would have clawed it back through the Internet. Technology having failed me, my message reached its recipient. She said she would be very happy to talk to me about Jesus. You probably already know this, but Christians love talking about Jesus.

I spent the few days before our call feeling like an idiot, wondering what on earth I planned to ask her. Do you like Jesus? What was Jesus’ deal? Why did he ice that fig tree?

And now we reach the part of the story that gets a bit hand-wavy. About an hour before our call, I knew: I believed in God. Worse, I was a Christian. It was the opposite of being punk rock.

Now, if you’ve been following along, you know already. I was crying constantly while thinking about Jesus because I had begun to believe that Jesus really was who he said he was, but for some reason, that idea had honestly not occurred to me. But then it did, as though it always had been true. So when my friend called, I told her, awkwardly, that I wanted to have a relationship with God, and we prayed, and giggled a bit, and cried a bit, and then she sent me a stack of Henri Nouwen books, and here we are today.

Since then, I have been dunked by a pastor in the Pacific Ocean while shivering in a too-small wetsuit. I have sung “Be Thou My Vision” and celebrated Communion on a beach, while weirded-out Californians tiptoed around me. I go to church. I pray. My politics have not changed; the fervency with which I try to live them out has. My husband is bemused by me, but supportive and loving.

No More Chill
I am occasionally asked by other Christians, “What happened during that hour?” I answer that God did not speak to me. Rather, like the protagonist in Memento putting his past together with Polaroids, I figured out what I already knew. What happened during that hour was the natural culmination of my coming to faith: I had been cracked open to the divine, I read books that I would have laughed at before the cracking, and the stars lined up and there was God, and then I knew, and then I said it out loud to a third party, and then I giggled.

This is why apologetics, in my opinion, are hugely unconvincing. (Dallas Willard, for the record, never debated unbelievers.) No one could have in a billion years of their gripping testimony or by showing me a radiant life of good deeds or through song or even the most beautiful of books brought me to Christ. I had to be tapped on the shoulder. I had to be taken to a place where books about God were something I could experience without distance. It was alchemical.

I have been asked if deciding to become a Christian ended my exciting new crying-multiple-times-a-day hobby. The truth is that I continue to cry a lot more than I did before either Be-With-Me-Gate or the Dallas Willard Incident. I am more undone by love, or kindness, or friendship than I would have thought possible. Last night I tried to explain who Henri Nouwen was to some visiting cousins, and they had to bring me Kleenex, which they did sweetly and cautiously, as though I might melt in front of them. This morning I read a piece in Texas Monthly that literally sank me to my knees at how broken this world is, and yet how stubbornly resilient and joyful we can be in the face of that brokenness. I never possessed much chill, to be honest. Now I have none whatsoever.

There are times I feel a bit like a medieval peasant, in that I believe wholly in God now, but don’t always do what he wants, or, like Scarlett O’Hara, put hard conversations with him off until I’ve done the thing I wanted to do. It’s a thrumming backdrop to the rest of my life. My Christian conversion has granted me no simplicity. It has complicated all of my relationships, changed how I feel about money, messed up my public persona, and made me wonder if I should be on Twitter at all.
Obviously, it’s been very beautiful.

Nicole Cliffe is cofounder and coeditor of the website The Toast and lives in Utah. From an article published in Christianity Today, June 2016.