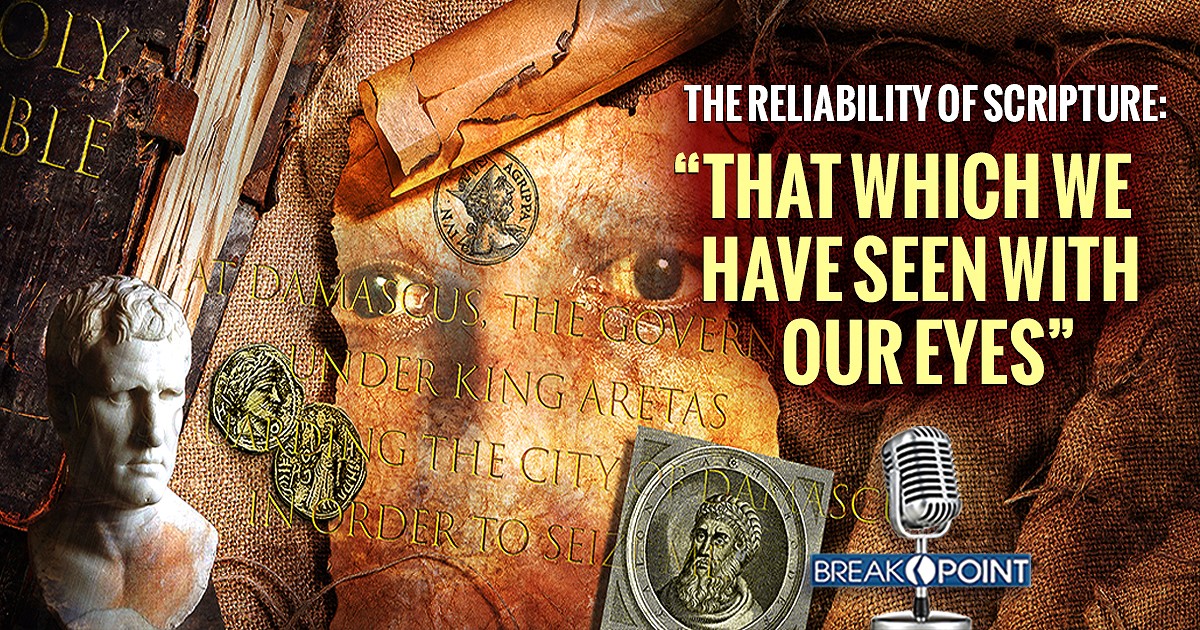 Leave a comment January 4, 2018 • Featured Blog
The Reliability Of Scripture

What do a Greek-speaking Egyptian rebel and an ancient king of the Nabateans have in common? They both point to the reliability of the Bible.

One of the most popular topics we cover at BreakPoint is the way that archaeology and related disciplines are continually confirming the biblical narrative.

It’s easy to see why so many Christians respond to this topic: unlike other faiths, Christianity is rooted in real human history. It tells the story of God’s actions in the same world that you and I occupy, as opposed to some mythical “once upon a time.”

The September/October 2017 issue of Biblical Archaeology Review (BAR) presents the latest entry in a series of articles listing biblical figures whose existence have been confirmed in extra-biblical historical sources and/or archaeology.

The editors of BAR have told the author, Lawrence Mykytiuk of Purdue University, that his previous entries are among the most popular articles ever published in the magazine, whose readership is a combination of scholars and very well-read laymen. In his last entry, Mykytiuk focuses on political figures named in the New Testament. Some of them, like the four Roman emperors named in the New Testament, are obviously well-attested. Something similar can be said about the plague of the Herodians that feature prominently in the Gospels and the book of Acts.

But the New Testament writers don’t stop at the obvious. They, especially Luke and Paul, provide details that only someone who lived through the events or spoke to an eye-witness could provide. One confirmed example is found in 2 Corinthians 11. Paul tells the Corinthians that “At Damascus, the governor under King Aretas was guarding the city of Damascus in order to seize me.”

Aretas, “a contemporary of Herod Antipas,” was a real person whose existence has been documented by both extra-biblical sources and archaeology. Coins and other artifacts bearing his name have been found from what’s now Jordan to Italy. What we know of his life and reign outside of the Bible argues for the historicity of Paul’s account.

A more obscure example is found in Acts 21. Paul has returned to Jerusalem, where he knows that imprisonment and possibly death await him. He is attacked by a mob at the Temple and only survives because he is rescued by Roman soldiers. The commander, upon hearing Paul speak Greek, says “Are you not the Egyptian, then, who recently stirred up a revolt and led four thousand men of the Assassins out into the wilderness?” Paul replied that no, he was a Jew from Tarsus, which he called “no mean city.”

This exchange was a reference to a rebellion chronicled by the Jewish historian Flavius Josephus. There was an Egyptian, who would have spoken Greek, who lead a violent uprising involving thousands of men in the wilderness at around the same time as the events in Acts.

While the Romans put down the insurrection, the Egyptian escaped and was believed to be in or near Jerusalem. Thus, what Luke records in Acts is exactly the kind of exchange that would have taken place at that time between Roman troops and suspicious Greek-speaking strangers.

These are just two examples of many, written in both parchments and in the very ground of the Holy Land, that attest to the reliability of Scripture and the historical nature of Christian revelation. You see, instead of being myths and fables or even disembodied ideals, Christian proclamation is about, as 1 John says, that “which we have heard, which we have seen with our eyes, which we have looked at and our hands have touched . . .”

So it shouldn’t surprise us that the list of biblical figures and places confirmed by archaeologists and other scholars continues to grow. It’s exactly what we should expect—and I’m happy to be the one who reminds us this time.