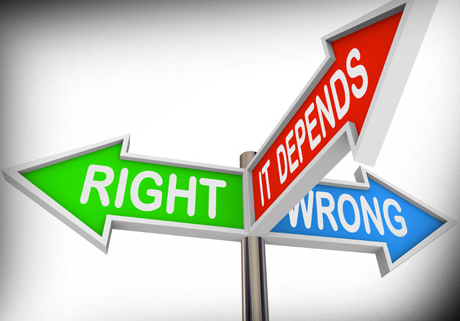 As a former member of the notorious Mafia crime syndicate, Michael believed in, and followed, the Machiavellian code of ethics until his spiritual conversion. Niccolo Machiavelli was an Italian Renaissance historian, philosopher and writer. His last name spawned the negative term, “Machiavellianism.” In Machiavelli’s book, The Prince, this characterized highly unscrupulous politicians. He essentially taught that anything is acceptable for pursuing self-interest and personal gain.

This was the same perspective Franzese used to justify his actions before his life-changing encounter with Jesus Christ. If victimized by his crimes, however, I doubt you would have had an appreciation for his personalized code of ethics or how he rationalized the wrongful deeds for which he later repented.

Sadly, we see similar beliefs and behavior in much of the business and professional world. You can learn a lot of things in today’s business schools, but one thing you cannot learn is a universally agreed-upon code of ethics. It’s almost like in the days of ancient Israel, referred to in Judges 21:25 – “In those days there was no king in Israel; everyone did what was right in his own eyes.”

Although we do not hear the term as much these days, business gurus used to speak of “situational ethics,” meaning to do whatever seemed appropriate at the moment for whatever goal or objective you desired to accomplish. Not much has changed today. Many people in the marketplace believe honesty and integrity are necessary only when it is expedient and serves their purposes.

Is it any wonder that almost daily we hear or read news reports of gross ethical violations even at the top levels of some of our world’s most prestigious businesses and corporations? Without accepted standards for behavior and practice, everyone feels free to do what seems right in their own eyes. This is why the timeless teachings and truths of the Bible provide the most reliable guidelines:

Wrongdoing will be punished. As Franzese discovered, believing one’s actions are justified does not give protection from consequences. “There is a way which seems right to a man, but its end is the way of death” (Proverbs 14:12). “Food gained by fraud tastes sweet to a man, but he ends up with a mouth full of gravel” (Proverbs 20:17).

God presents the ultimate standard. Our young people are being trained that truth is relative, that they should not judge others – and that others should not judge them. If we imagine communities filled with Machiavellians, we quickly see the flaw in that logic. “Honest scales and balances are from the Lord; all the weights in the bag are of his making” (Proverbs 16:11).

Honesty and integrity provide security. If we strive to be honest in all our dealings, there is no need to conceal deceptions. “The integrity of the upright guides them, but the unfaithful are destroyed by their duplicity” (Proverbs 11:3).