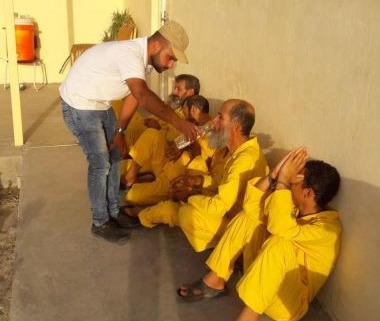 September 14, 2016 – Carey Lodge  On the outskirts of Fallujah, just weeks after Islamic State had been driven out of the city by the Iraqi army, a team of Sunni and Shia Muslims visited a compound where hundreds of people who had fled the city were being held. They brought supplies – food and water – to those cramped into the tiny space, as would be expected by humanitarian organisations working in the region.

But something about this was different. The recipients of this aid weren’t the families who had been traumatised by militants; who had spent years living in fear and then weeks trapped as Fallujah became a battleground between government and ISIS forces. These were ISIS fighters.
A team from the Preemptive Love Coalition, a US-Iraqi non-profit organisation that’s been active in the Middle East for a decade, took food and water to ISIS militants; providing respite to those who had been captured as Fallujah fell.

Hundreds of suspected ISIS members were being held in the detainment compound not far from the city. Some would have been innocent men and boys; separated from their families as they fled and sent for interrogation by the Iraqi army. Others were confirmed militants. All were given food to eat and water to drink. The reason? Love means going to the hard places.

Only light can drive out darkness
The highly sensitive nature of the visit meant that only Iraqi Muslims entered the compound. Among them was a man named Sadiq. He gave water to a bound prisoner dressed in a yellow jumpsuit, who he recognised from an ISIS propaganda video posted online. This man, a tribal sheikh loyal to Islamic State, had stood and watched as a friend of Sadiq’s was brutally executed.
“You killed my friend,” Sadiq said, as he poured water into the man’s mouth. “But I’ve come here to feed you.”

Matthew Willingham, from Preemptive Love Coalition, said “We believe only light can drive out darkness. Love is the only real answer to hate. We always want to be careful,” he explained to Christian Today. “We don’t want to come across as cowboys; we don’t want to be kidnapped, we don’t want to be blown up or tortured. But we also don’t want to live exclusively by the principles of risk management. We don’t want to be controlled by fear. We seek guidance from an extensive Iraqi network before undertaking any trip, but unless it’s told categorically it is too dangerous, we usually go ahead.” They are well aware of the risks and have had hard conversations about the possible repercussions of work on the front line. And yet they keep going.

“As long as we live behind these fortified borders, it’s going to be harder to see reconciliation happen. We’ve got to go to them, let them be heard, and acknowledge their pain. It’s beautiful to see how humanising people changes the conversation.”

When Sadiq and his fellow Muslim colleagues delivered aid to the Fallujah detainees, prisoners openly wept. While the team had been expecting an aggressive reception, they were instead greeted with row upon row of broken men. When Sadiq spoke to a group of convicted ISIS members – some of them jihadi leaders – they broke down, weeping. “They kept saying: ‘I’m sorry, I’m sorry, I’m sorry, I’m sorry’,” Willingham recalls.

Love has the power to convict
As a Christian, Willingham says he saw the love of Christ in action that day, revealed through Sadiq – a Muslim. “I see this as the love of God reaching down into the world,” he says. “That’s a Christ-like love, extended to his [Sadiq’s] enemies. Not people he disagrees with, but his enemies. People who murdered his friends. That is the love of God in Christ.”

Their mandate to “love anyway” – regardless of race, religion or creed – has led the team to help victims of ISIS’ reign of terror not just in their immediate needs, but also in building a brighter future. They’ve delivered 100,000 pounds of emergency food aid, but have also given small business grants to widows, are involved in peace-making initiatives and are helping get children back into the classroom.

Taking Jesus seriously
For the many members of their team their mission is driven by their love for God. They are trying to figure out what it would mean to take Jesus seriously when he says ‘follow me’ and ‘bless those who persecute you.’ The message of the gospel story is one of love that pursues the other all the way to death. God…taking on flesh and dying in pursuit of those that have become his enemies. That’s the message we want to live out: Following in those footsteps, laying down our lives and pursuing those who have become our enemies, even unto death.

You can read the entire article in Christian Today by clicking this link:  http://www.christiantoday.com/article/meet.the.christians.who.love.their.enemies.even.when.its.isis/95436.htm