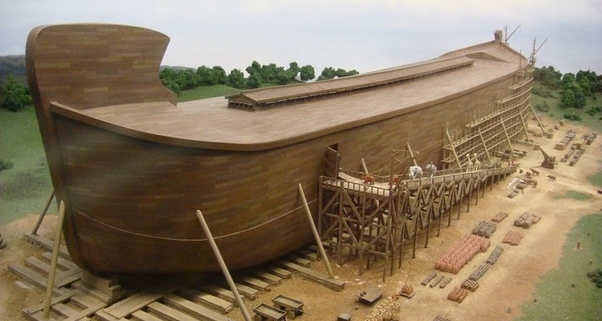 Some people like to dream. “If only I had the opportunity to show what I could do!” Others talk about what they will accomplish when “their ship comes in.” We talk about people getting their big break when “opportunity knocks.” But what if, when opportunity knocks, we are taking a nap? Taking out the trash? Or pursuing some hobby?

I don’t know who originated it, but recently I read an insightful comment. Remember Noah, the fellow in Genesis 6 whom God assigned the responsibility of building a huge ark to preserve his family and representative animals from an imminent flood? Well, as the observer pointed out, “Noah didn’t wait for his ship to come in; he built one.”

We live in a time when an increasing number of people are keeping a vigilant eye out for a free lunch, free education, and a slew of other benefits and services they have not earned. Basically, they are waiting for someone else to do the hard work, to provide the resources they are not willing to put forth the necessary effort to produce. They are expecting to win the lottery – without even going to the trouble of buying a lottery ticket.

As a young man, I had been coddled by my parents and lacked a reasonable work ethic. Fortunately, I had an uncle who kindly but firmly taught me that if you are going to succeed at anything, you will need to do the work to achieve it. After becoming a follower of Jesus Christ, I prayed for God to bless my career, but understood that He expected me to do my part as well. The result, I ultimately learned, was that God is “able to do immeasurably more than all [I could] ask or imagine, according to his power that is at work within us” (Ephesians 3:20).

Think about Noah again for a moment. Biblical scholars tell us that, according to the passage, it had not yet rained on the earth up to that time. So when God informed Noah that it was going to not only rain, but also flood the entire earth, the would-be ark builder was probably a bit perplexed. But Noah did as commanded, building a ship of immense size – empowered and directed by the Lord. We might not be asked to construct an ark, but it is likely He might ask us to do something equally formidable. Are we willing to do the work?

The Bible teaches much about the importance of hard work, especially when pursuing clear-cut goals and purposes. Here are some of the principles it offers:

Goals require more than dreaming. Many of us have lofty aspirations, things we would like to accomplish. But wishful thinking and hoping is not enough to turn our dreams into reality. “He who works his land will have abundant food, but he who chases fantasies lacks judgment” (Proverbs 12:11).

Action always speaks louder than words. “Talk is cheap,” the adage reminds us, but the real expense comes in actually following through on our good intentions. Writing down goals is always a good idea, but formulating a measurable, tangible plan for accomplishing them – and then following through – is much better. “All hard work brings a profit, but mere talk leads only to poverty” (Proverbs 14:23).

Half-hearted efforts seldom succeed. One day, my friend Gary Highfield realized his “want to” – desiring a better life for his family – had to become “have to,” shaped by a variety of efforts to transform himself into a more valuable worker. His efforts paid off, and he even wrote a book, When Want To Becomes Have To, that inspires many young people today. “Whatever you do, work at it with all your heart, as working for the Lord, not for men, since you know that you will receive an inheritance from the Lord as a reward” (Colossians 3:23-24).

© 2021. Robert J. Tamasy has written Marketplace Ambassadors: CBMC’s Continuing Legacy of Evangelism and Discipleship; Business at Its Best: Timeless Wisdom from Proverbs for Today’s Workplace; and The Heart of Mentoring, coauthored with David A. Stoddard. Bob’s biweekly blog is: www.bobtamasy.blogspot.com.

1. Are there opportunities you would like to receive to advance yourself personally, or professionally? If so, what are they?

2. How do you think you could become more diligent in pursuing those opportunities, rather than waiting for them to suddenly appear at your door?

4. Why do you think it is difficult for some people to act upon their dreams and aspirations? If you knew of someone stuck in “dreamland” rather than moving into action, how do you think you – or someone else – could help in acting upon what they have been envisioning?