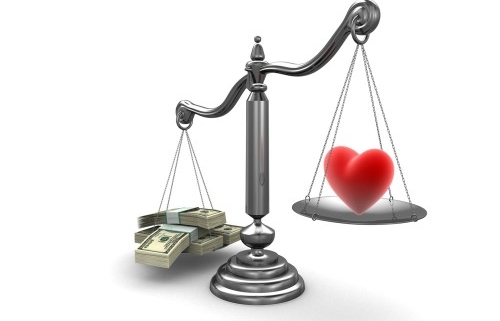 July 25, 2016 – Jim Langley   A business article in the Los Angeles Times caused me to do some research on the new CEO for a major airline. Within six weeks of taking on this position, the top executive had been hospitalized after suffering a serious heart attack. Months later, while on leave of absence, he received a heart transplant. The article stated that not long after his transplant surgery, this CEO had decided to return to work full-time with the long, arduous hours and extensive travel needed to turn the struggling airline around.

At least on the surface, according to the article, the bottom line for him seemed to be a very large compensation package he would receive if he completed six straight months without any more leaves of absence. As I read the article, I wondered whether he had truly considered the cost of pursuing such a sizable financial reward, risking his health and recovery from very serious, invasive surgery?

However, it is not necessary to go through an organ transplant to recognize the impact our work priorities might have on our life and the lives of those closest to us. I imagine the airline CEO is not returning strictly for the money. He likely also loved the challenge of turning an organization around and was willing to take the calculated risk of potential heart failure, even death. Another article suggested the airline’s demand that the top executive return to work just two months after his heart transplant could be considered a “heartless act.”

Perhaps you can relate to this executive’s dilemma. I certainly can. Work is often very demanding and can truly take a toll on a life, even for those enjoying good health.

Let us consider what the Bible says about the cost associated with our life decisions. Speaking to some of His followers, Jesus offered an analogy: “Suppose one of you wants to build a tower. Will he not first sit down and estimate the cost to see if he has enough money to finish it? For if he lays the foundation and is not able to finish it, everyone who sees it will ridicule him saying, ‘This man began to build and was not able to finish.’ Or suppose a king is about to go to war against another king. Will he not first sit down and consider whether he is able with ten thousand men to oppose the one who is coming against him with twenty thousand? If he is not able, he will send a delegation while the other is still a long way off and will ask for terms of peace. In the same way, any of you who does not give up everything he has cannot be my disciple” (Luke 14:28-33).

Elsewhere Jesus made a definitive statement about priorities, observing, “No one can serve two masters. Either you will hate the one and love the other, or you will be devoted to the one and despise the other. You cannot serve both God and money” (Matthew 6:24).

More than 20 years ago I considered the cost and decided it was time to let God have control of my life. This meant I would no longer be a slave to my business; I had come to understand my relationship with God was my top priority. Today, work remains important to pay the bills and provide for my loved ones, but I have also learned to put my family and others before the office as well. God’s providence continues to amaze me as He meets all of our needs as we simply trust in Him. As a “satisfied customer,” I strongly recommend you also consider the cost as you deal with life’s tough decisions.

© 2016, all rights reserved. Jim Langley has been a life and health insurance professional since 1983 and an active member of CBMC of Santa Barbara, California, U.S.A. since 1987. Adapted from one of his “Fourth Quarter Strategies” discussions, these are designed to “light a fire under Christian business and professionals to become more effective in the marketplace for Jesus Christ.” His website is: www.fourthquarterstrategies.com