It was more than two years ago, but I still remember the day vividly. I was with my friend, Dean Parrack, at the end – in his last moments of life on earth – because a man should not die alone.

I have seen more than my share of people die – including on the battlefields of Vietnam – but this was different. Dean wanted to go – because he knew without a single doubt this was only the end of the beginning, and the start of eternity with God.

Years ago, Dean had suffered a debilitating stroke, confining him to a wheelchair. He sold his home so he and his wife, Jean, could move to “assisted living.” I was with him and helped him to discard plaques, trophies and awards he had accumulated as a highly respected corporate executive with IBM. He also disposed of various forms of recognition for his service to many civic and Christian organizations.

For Dean, the memorabilia had been kind expressions of appreciation. But in the end, they were nothing more than “stuff” that gathered dust and cluttered his life. Where he was going, he did not need them. And considering his ultimate destination, he could not take them there anyway.

One thing Dean did not discard was his faith in God. Throughout his adult life, it had served as his anchor, his road map, and now his beacon as he traveled the final stages of his earthly journey.

For years he had traveled the around the United States and the world, often in his role as chairman of Christian Business Men’s Committee International. But now his body was confined to a bed.

But Dean the person was NEVER confined. His ministry simply took a different form, as he became what he described as a “prayer warrior. He started his “job” early, often beginning the day at 3 a.m., praying for God for specific people and events all around the globe.

Observing how Dean conducted his latter days, despite his disability, I could not help but wonder: How will I face major life challenges and my own death? There seem to be two very different approaches to this question. The first is self-centric, sometimes summed up at graduation ceremonies by quoting a poem titled, “Invictus,” by William Ernest Henley. It is best known for its final lines:

“…It matters not how strait the gate, How charged with punishments the scroll,

I am master of my fate: I am captain of my soul.”

But Dean approached life with a God-centric view and rewrote Henley’s poem, calling it “Convictus.” His version concluded by stating:

“Beyond this place of wrath and tears, Looms but the Horror of the shade,

And with the menace of the years, Without Christ, I would be afraid.

It matters not how strait the gate, How charged with punishments the scroll,

My friend Dean finished well, taking his last breath with peace and confidence. Will we do the same?

Ken Korkow lives in Omaha, Nebraska, U.S.A., where he serves as an area director for CBMC. This is adapted from the “Fax of Life” column that he writes each week. Used with permission.

2.  Can you think of someone you have known that, similar to Dean Parrack, finished well – in your opinion? If so, what were some characteristics of how this closed out his or her life?

3.  How is it possible not to feel confined as a person, as Mr. Korkow wrote, despite severe physical restrictions, regardless of the stage of one’s life? Does this seem realistic to you? Explain your answer.

4.  Considering the poetic stanzas that close this “Monday Manna,” if you are honest, which would fit you best? Who is the master of your fate, the captain of your soul? 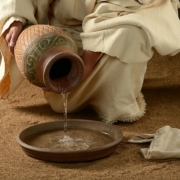 What Are You Working For?

What Is Quality – And How Do You Achieve It?

You Win Races Only When You Finish

Where Do You Place Your Passion?

Why the Bible Is the Best Business Book I've Ever Read