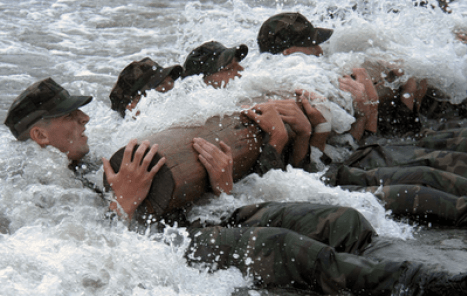 Speaking at a commencement ceremony at the University of Texas in 2014, Naval Admiral William H. McRaven, ninth commander of the U.S. Special Operations Command, talked about crucial lessons he learned during basic training for Navy SEALS. One particularly powerful lesson was impressed on him when he and other SEAL prospects were faced with 15 hours of “fighting the freezing cold, mud, the howling wind and pressure from the instructors to quit.”

This almost unimaginable challenge came at the conclusion of what was called “hell week,” after six days of no sleep, constant physical and mental harassment. This make-or-break exercise was conducted at the Mud Flats, an area between San Diego, Calif., U.S.A. and Tijuana, Mexico, a swampy patch of terrain where the mud will engulf anyone in it.

With eight hours remaining to swim in the cold mud, some men were ready to quit, McRaven said. Hopelessness was settling in. Then unexpectedly, one brave man began singing. Soon, one by one, others joined in the singing, and “somehow the mud seemed warmer and the wind tamer,” according to the admiral. As a result, the SEAL trainees survived the night.

The singing was off-key but enthusiastic, he said. What it provided was hope, a necessary element for surviving any harsh trial. “If I have learned anything in my time traveling the world, it is the power of hope,” McRaven stated. “The power of one person – Washington, Lincoln, Mandela, and even a young girl from Pakistan, Malala – one person can change the world by giving people hope.”

Few of us in the 21st century marketplace will ever experience the intensive survival training of military Special Forces, but sometimes enduring the stresses of a workday can seem more demanding than we could have ever imagined. At times like that, we desperately need one another, singing or not.

The Bible recognizes daily living – on the job and at home – can push us to our physical, mental and emotional limits. It offers principles for surviving demands that seem beyond our capacity to endure:

We are there for one another. When we work together as a team, committed to the same goals and objectives, we can provide strength and encouragement for one another when needed. “We urge you, brethren, admonish the unruly, encourage the fainthearted, help the weak, be patient with everyone” (1 Thessalonians 5:14).

We can help in supplying each other with motivation and inspiration. Emotions go up and down during difficult times. Members of a well-functioning team that are strong can support those feeling weak. “Let us hold unswervingly to the hope we profess., for he who promised is faithful. And let us consider how we may spur one another on toward love and good deeds” (Hebrews 10:23-24).

We can keep one another focused on the ultimate goal. When hope is failing, it helps to remind ourselves of the reward that lies ahead. “Therefore, my dear brothers, stand firm. Let nothing move you. Always give yourselves fully to the work of the Lord, because you know that your labor in the Lord is not in vain” (1 Corinthians 15:58).

Copyright 2015, Integrity Resource Center, Inc. Adapted with permission from “Integrity Moments with Rick Boxx,” a commentary on issues of integrity in the workplace from a Christian perspective.

More To Photos – And Work – Than 'Pixels' 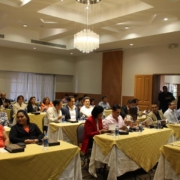 Rooted Together For Strength

Restoring a Proper Emphasis For Christmas

Having The Right Tools