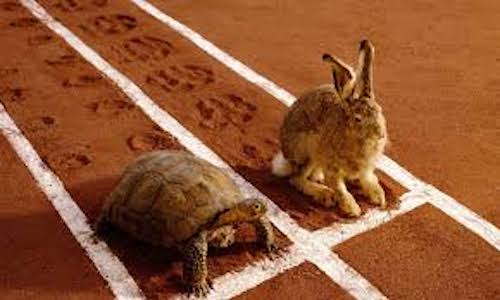 Most of us are familiar with Aesop’s fable about “The Tortoise and the Hare.” The humble tortoise challenges the arrogant hare to a race. The quick rabbit jumps to an early lead, then decides to take a nap. He awakens to find the tortoise has trudged pass him to win the race. The supposed moral of this story is that slow and steady wins the race, but often when children are asked their interpretation, they say that the hare is clearly faster, but he shouldn’t have stopped for the nap. Nobody really wants to identify with the slow and steady turtle.

Among my friends are several millionaires. None of them won the lottery, came up with a brilliant invention, made a hit recording, or landed a huge business deal. They all just spent less than they earned, paid their bills, and invested the rest over a long period of time. Proverbs 28:19-20 says, “Those who work their land will have abundant food, but those who chase fantasies will have their fill of poverty.  A faithful person will be richly blessed, but one eager to get rich will not go unpunished.”

Warren Buffet is one of the wealthiest people on the planet. He freely gives financial advice to anyone who asks. A reporter once asked him why so few people take his advice. He quickly answered, “No one wants to get rich slow.” Accumulating wealth the “Buffet Way” is not hard; it just is not exciting.

The Bible’s Old Testament book of Proverbs offers a number of excellent principles about how to properly handle money and wealth. Here are some other examples:

Haste is a very unreliable approach to financial management. Like the proverbial speedy rabbit, it may seem easy to acquire wealth in a hurry. But it can be lost just as quickly. “A faithful man will be richly blessed, but one eager to get rich will not go unpunished” (Proverbs 28:20).

Do not become a servant to debt. Purchasing things on credit, whether for personal use or a business, is tempting. It might even seem like a shortcut to our goals. However, it is important to realize debts must be repaid, limiting one’s freedom in the use of financial resources. As Proverbs 22:7 says, “The rich rule over the poor, and the borrower is servant to the lender.”

Do not become obligated for the debts of others. Cosigning, or serving as a guarantee for payment of someone else’s loans, even if it is for a family member or close friend, can be dangerous. It is wiser to give money than to become liable if the other person fails to meet the obligations. “Do not be a make who strikes hands in pledge or puts up security for debts; if you lack the means to pay, your very bed will be snatched from under you” (Proverbs 22:26-27).

Failure to save a portion of your earnings can prove costly. Almost as dangerous as trying to live on credit is a habit of spending everything that you earn, leaving no savings or surplus. What will you do in an emergency? “In the house of the wise are stores of choice food and oil, but a foolish man devours all he has” (Proverbs 21:20).

© 2021. Jim Mathis is a writer, photographer and small business owner in Overland Park, Kansas. His latest book is The Camel and the Needle, A Christian Looks at Wealth and Money. He formerly was executive director of CBMC in Kansas City, Kansas and Kansas City, Missouri, U.S.A.