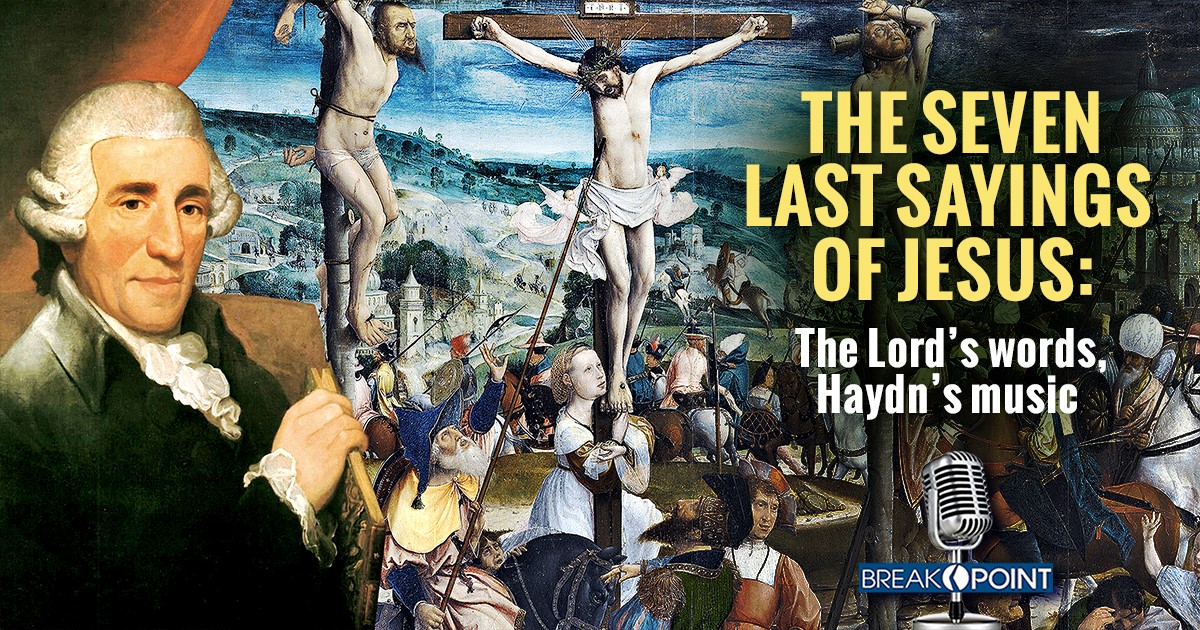 Eric Metaxas – Welcome to Holy Week. In 2012, the English poet Ruth Padel accepted a commission from Manchester’s Hallé Orchestra to write poems that would be read between the movements of Joseph Haydn’s “The Seven Last Words of Our Savior on the Cross.”

Writing about her experience two years later in The Guardian, Padel called her acceptance of the commission “rash.” Her father was a psychoanalyst, her mother was a great-grand-daughter of Darwin—what could she have to say on this subject?

By her own admission, Padel had “no idea if what [she] did works theologically, but musicians find it OK to work with.” Thankfully, we don’t have to settle for “OK to work with.”

In 1783, the Cathedral of Cadiz, Spain commissioned the great composer Joseph Haydn to write a musical setting for what are known as the “Seven Last Words (or Sayings)” of Jesus on the cross.

For those of you who are unfamiliar with the “Seven Last Words,” they are “Father, forgive them for they know not what they do;” “Today you will be with me in Paradise;” “Behold your son/Behold your mother;” “My God, my God, why have you forsaken me?” “I thirst;” “It is finished;” and finally, “Father into your hands I commend my spirit.”

Haydn’s opus consists of nine parts: an introduction, followed by a musical meditation on each of the seven sayings, and then completed by a section entitled “Il Terremoto,” which is “earthquake” in both Italian and Spanish. Il Terremoto, of course, refers to the earth quaking in Matthew 27 when Christ “yielded his spirit” and died.

At the original performance at Cadiz Cathedral, the Bishop spoke one of the sayings of Jesus, “delivered a discourse thereon,” and this was followed by Haydn’s musical meditation on the words.

Since Haydn never specified what, if anything, should be said between movements, subsequent performers have felt free to add, or not add, whatever was “OK to work with.” But, as the Vermeer Quartet learned, paying heed to what works theologically is the way to go. In 1988, they won a Grammy nomination for their performance, which featured excerpts of sermons by Martin Luther King, Jr. and Billy Graham between movements.

The recording came about because music-only performances left them with the “polite applause of a worn-out audience.” So, they decided to “restore Haydn’s work to its original sacred setting.”  The experience was “transforming.” As the quartet’s violinist told the New York Times, “Though we knew the music so very well . . . we had never before been obliged to relate it in its intended context.”

Haydn, who typically began his manuscripts with the phrase “in nomine Domini,” “in the name of the Lord,” and ended them with “Laus Deo,” “praise be to God,” would, no doubt, approve.

Click here to download the free pdf booklet “The Seven Last Sayings of Jesus from the Cross” put together by the Colson Center.