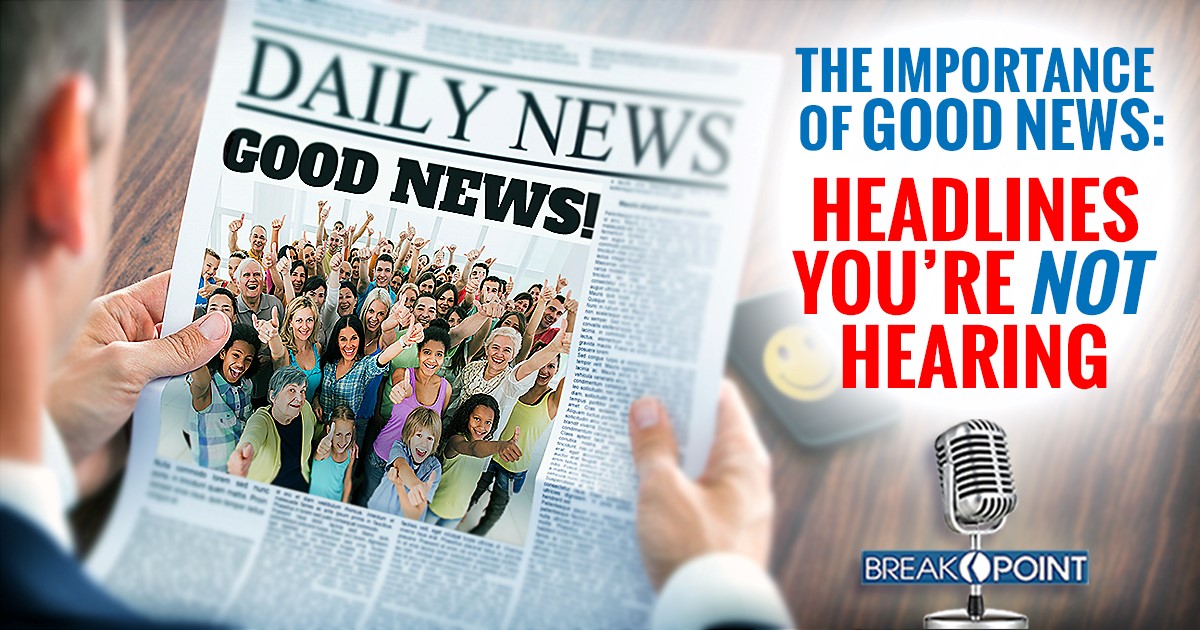 Does it seem like the world is going to heck in a handbasket? Then it may be time for a reality check.

September 13, 2017 – Eric Metaxas   It’s been a summer of rough news. Racism, riots, and political violence. Communities on the Gulf Coast continue wading through the devastation of hurricane Harvey, and now another storm is bearing down on Florida. We have plenty of reasons to be praying and doing all we can to alleviate suffering. There’s cause for grief about the news—but not for pessimism.

Writing at The Guardian, Oliver Burkeman suggests that despite a dragging civil war in Syria, heart-rending photos of drowned refugees, North Korea’s nuclear saber-rattling, disasters, terrorist attacks, and racial violence, the world is objectively better now than it’s ever been.

Hard to believe? Well, here are the facts: Swedish historian Mark Norberg breaks down global indicators of human flourishing into nine categories: food, sanitation, life expectancy, poverty, violence, the state of the environment, literacy, freedom, equality, and the conditions of childhood. And in nearly all of these categories, we’ve seen vast improvement in my lifetime.

Despite the fact that nine out of ten Americans say worldwide poverty is holding steady or worsening, the percentage of people on this planet who live on less than two dollars a day—what the United Nation’s defines as “extreme poverty”—has fallen below ten percent, which is the lowest it’s ever been.

The scourge of child mortality is also at a record low. Fifty percent fewer children under five die today than did thirty years ago.

Worldwide, 300,000 more people gain access to electricity every day. In 1900, global life expectancy was just 31 years. Today, it’s an impressive 71 years. And violent crime rates in the United States are the lowest they’ve been in half a century.

Nicholas Kristof wasn’t too far afield when he called 2016 “the best year in the history of humanity.” This year may see even more progress.

So why do these cheery pronouncements strike us as inaccurate—even outrageous? Why—according to a recent poll—do a vanishingly small six percent of Americans think the world as a whole is becoming a better place?

Burkeman lays much of the blame on the press. Thanks to a 24-hour news cycle that actively seeks out and overplays the worst stories, our perception of the world is skewed. “We are not merely ignorant of the facts,” he writes. “We are actively convinced of depressing ‘facts’ that aren’t true.” And no wonder! It’s hard to sell papers and get Web traffic with good news. No one reports when a plane takes off. They only report when they crash.

But a great deal of the blame for our unjustifiably gloomy view of the world also falls on our shoulders. Quite simply, we often enjoy being angry about the state of the world, especially when it allows us to blame someone else. We are addicted to news-induced anger.

That’s why it’s so important—while acknowledging the desperate evil and suffering around us—to appreciate the good news, the progress, and the things we have to celebrate. After all, how can we truly comprehend what’s wrong with the world if we don’t recognize when something is going right?

War, famine, disease, and hatred should all remind us that God’s world, which He created and pronounced “very good,” is broken, and it’s our fault. But here’s the real comfort: It’s still—as the hymn says—our Father’s world. Let us therefore never forget that “though the wrong seems oft so strong God is the ruler yet.”

As Christians, we know where history is headed, and we know how the story ends—with the redemption and restoration of all things. We who have the good news should be the first to recognize all good news, not in spite of, but in the midst of the bad.