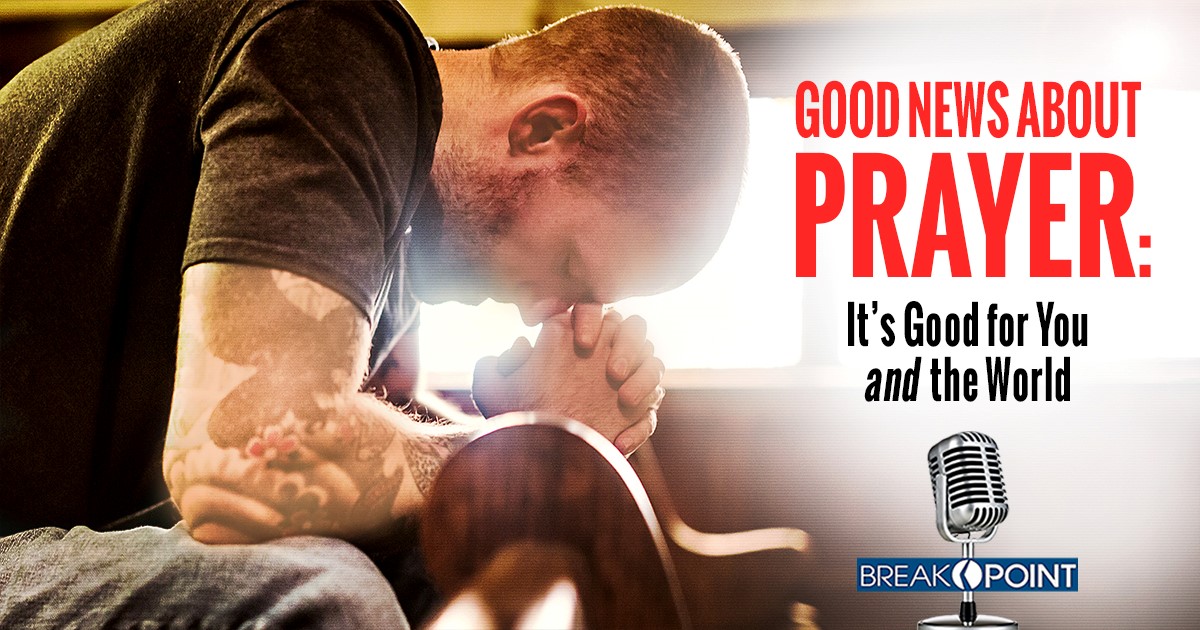 Leave a comment May 9, 2018 • Featured Blog
Good News About Prayer: It’s Good For You and The World

Eric Metaxas – There’s been much disparaging of “thoughts and prayers” lately. But I’ll tell you why prayer is good for you and for the world.

Want to enrage a secularist? Well, the next time there’s a natural disaster or national tragedy, such as another mass shooting, you can say that your “thoughts and prayers” are with the victims. They seem to hate that, and say that “thoughts and prayers” are not sufficient unless you also do something tangible, like passing a law. Well, I don’t know how effective sending thoughts is, but I can guarantee you that prayer, as Jesus said, can move mountains.

And it’s not just me saying this. Clay Routledge, a professor and psychological scientist, points to “the tested psychological and social benefits of prayer as well as the reality of how most believers turn to faith-based practices in addition to, not instead of, other courses of action.”

Let me share some of this good news about prayer. First, it’s associated with well-being and health. In one study of older adults, the negative effects of financial problems on one’s health were significantly reduced for people who pray regularly for others. For those who perceive of God as loving instead of as distant and unresponsive, prayer produces psychological benefits. People whose prayers centered on gratitude and care for others had the fewest symptoms of depression. I love that! Prayer is good medicine.

But does prayer actually do anything? Or is it, as our critics say, merely a distraction? Well, for starters, Routledge says that prayer “frees up cognitive resources needed to focus on mental tasks by reducing the extent to which people are distracted by negative emotions.” It also reduces alcohol consumption, helps promote a person’s value of sacrifice, and strengthens one’s relationships. Prayer even makes you happier!

And prayer doesn’t lessen one’s belief in science or medical treatment. As Routledge says, “For most believers, prayer isn’t a substitute for data-based solutions. It is a personal resource that complements and may even help facilitate other thoughtful action.”

One of my heroes, the great William Wilberforce, accomplished more “thoughtful action” than most, as the key figure in abolishing the British slave trade. But Wilberforce was also a man of prayer—prayer that fueled his faith in Jesus and compelled him to act for the good of his fellow man. It was Wilberforce who said, “Of all things, guard against neglecting God in the secret place of prayer.”

Maybe just maybe there’s a connection between Wilberforce’s “thoughtful action” and his humble prayer to our Savior.

Now will we always receive precisely what we have sought? No, of course not! Every responsible father gives his children not all that they want, but all they truly need—and our loving heavenly Father is no exception. Prayer opens the pantry of God’s provision.

The best part—prayer takes our focus off ourselves and places it where it belongs—on God Himself. And in so doing we are changed, for the better.

Prayer is no small thing, as Eric highlights. The apostle Paul encouraged believers to “Devote yourselves to prayer, keeping alert in it with an attitude of thanksgiving” (Colossians 4:2).