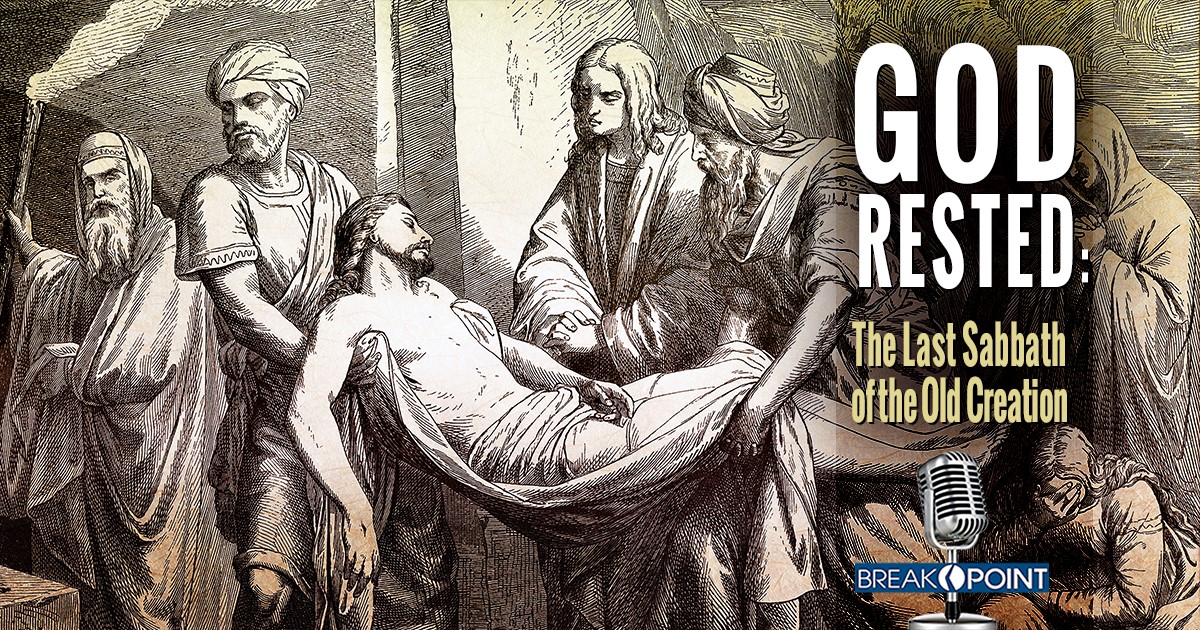 John Stonestreet – Holy Week is a reminder of many things, but one we often forget is rest. God did it, and so should we.

Here’s a tough one: If Jesus died and was in the tomb by Friday night, spent Saturday there, and rose Sunday morning before the women arrived, how can we say He was in the tomb for “three days and three nights?”

The answer is more than just a good lesson on why we shouldn’t read Western assumptions into the Bible. There’s also a worldview gem buried in this detail of Holy Week: a call to rest, not just from something like work, politics, or the news cycle, but in someone.

Ours is a culture that’s forgotten how to rest. The political environment is frantic, and social media makes us feel like we’re always missing out on something. It’s tempting to spend even the Lord’s Day worked up over the stories in our newsfeeds.

At least in some ways, this makes our culture similar to the first Holy Week.

Think of how the people of Jerusalem, who so eagerly welcomed Jesus in as King, demanded His crucifixion just days later. Peter, impatient for a revolution, cut off the servant’s ear in Gethsemane. In all of this restlessness, Pilate caved to a mob baying for the blood of an innocent man.

Even after Jesus’ resurrection, the disciples were still asking when He would return the earthly kingdom to Israel.

And so, between Good Friday and Easter Sunday, Jesus reminded them—and us—how to rest.

The gospels describe this time period in several ways: Jesus was “three days and three nights in the heart of the earth.” All four gospels report that His resurrection took place on “the first day of the week,” which for Jews was Sunday.

There’s some dispute on this, but the majority of scholars agree that Jesus died on a Friday—“the Day of Preparation.” This means that He was not in the tomb for 72 hours, no matter how you slice it. The only full day He spent behind the stone was Saturday—the Sabbath—the day on which God commanded the people of Israel to rest, just as He had rested after His work in Genesis 2.

Here’s where it can help to take off our Western glasses and think more like the authors of the New Testament. They didn’t divide days at midnight like we do, but at sundown. And in the first century Jewish mind, part of a day counted as a whole day. So, because Jesus was buried on Friday evening and rose on Sunday morning, He was in the tomb “three days and three nights” by Jewish reckoning. By modern reckoning He was in the tomb only one full day: Saturday, the Sabbath.

Here’s that worldview gem I promised: After God incarnate had declared His work on our behalf “finished,” He honored the Sabbath once more, just as He had at the beginning of creation. In the tomb, God rested.

G. K. Chesterton writes in “The Everlasting Man” that this Sabbath Jesus spent in the earth was the last Sabbath of the old creation, which was marred by Adam’s sin.

“What [the disciples] were looking at” on Sunday morning, writes Chesterton, “was the first day of a new creation, with a new heaven and a new earth; and in a semblance of the gardener God walked again in the garden, in the cool not of the evening but the dawn.”

When we rest on the Sabbath, we do so not in the old creation, but in the new—not in the world marred by Adam, but in the world being renewed in Christ. We trust not in politics or princes or earthly decrees, but in Him who became, Himself, our Sabbath rest.

Andrew Peterson makes this same connection in his new album, “Resurrection Letters: Prologue,” when he sings, “In six days God made the earth and all the heavens/but He rested on the seventh/God rested/He said that it was finished and the seventh day He blessed it/God rested.”