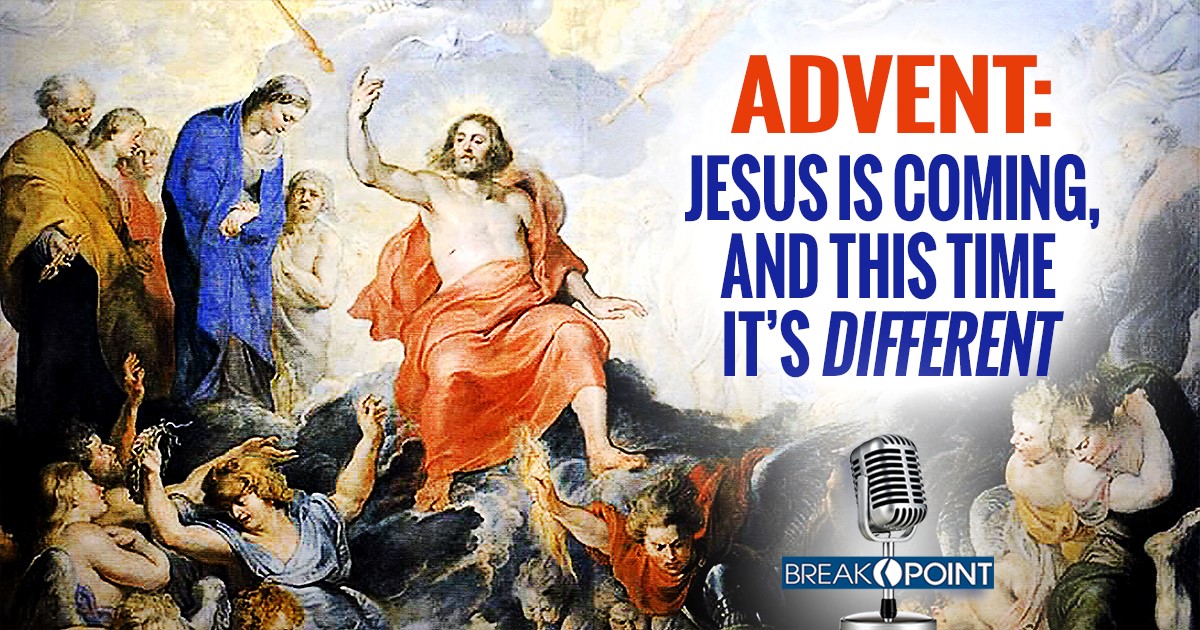 December 3, 2017 – John Stonestreet   TV commercials, radio stations, and shopping malls are all proclaiming that it’s the Christmas season! But actually, it isn’t.

Last Sunday in churches all around the world the Gospel reading was Matthew 25: 31-46.

The passage opens with words that should make our hearts soar, or, perhaps, shiver with dread: “When the Son of Man comes in his glory, and all the angels with him, then he will sit on his glorious throne. Before him will be gathered all the nations, and he will separate people one from another as a shepherd separates the sheep from the goats.”

As the passage makes clear, Christ’s second coming will be very different from his first. He will return in glory, not obscurity. He will return as the King of the Universe, not as a nobody in an obscure corner of the Roman Empire. And this time, He will do the judging.

This, and not shopping, or who saw whom kissing Santa Claus underneath the mistletoe, is what we’re supposed to be thinking about these next four weeks, the season known as Advent.

Now if you’re wondering, “Wait, isn’t this the Christmas season?” the answer is, well, “no.” Of course, we wouldn’t know that from watching television, where some networks have been running “Christmas” movies—none of which ever mention Jesus—since late October.

Beginning this Sunday, December 3rd through Christmas Eve, we’re in the season of Advent, according to the Church calendar. The word “Advent” comes from the Latin word adventus meaning “come to.” Thus, Advent is the season Christians anticipate the celebration of God’s coming to live and die as one of us. And to better appreciate the immensity of that gift, we are to put ourselves in the place of ancient Israel which yearned for the promised Messiah who would set things right.

One of the ways to do this is through hymns. The ancient Advent carol “Creator of the Stars of Night,” which dates from the 7th century, expresses this Old Testament yearning in a way that has literally stood the test of time.

“Thou, grieving that the ancient curse/ Should doom to death a universe/ Hast found the medicine, full of grace/ To save and heal a ruined race,” the hymn reads.

The “medicine” required to “save and heal a ruined race” was Jesus, as Paul told the Philippians, emptying himself and becoming obedient to death.

But that’s not the entire story. We also sing “At Whose dread Name, majestic now/ All knees must bend, all hearts must bow/ And things celestial Thee shall own/ And things terrestrial, Lord alone.”

That’s because Advent is not only a time of anticipating Christ’s first coming but also anticipating the next and final time Jesus comes to Earth. And, I repeat, this coming will be very different from the first: The same Jesus who was born in Bethlehem during the reign of Caesar Augustus will return as the “judge of the living and the dead,” and “his kingdom will have no end.”

This makes Advent not only a time of reflection, but also a time of repentance. This season is a time to examine our lives and ask ourselves whether we are sheep or goats. Are we living, as Paul wrote to the Corinthians, for ourselves or for Him who died for us and rose again?

Unfortunately, very little in contemporary culture, including both inside as well outside our churches, inclines us towards a proper observance of Advent. Thus, we have to be intentionally counter-cultural about it, and we must teach our children what the days before Christmas are supposed to be about.

A good place to start is Dietrich Bonhoeffer’s “God is in the Manger: Reflections on Advent and Christmas.”

Be joyful, reverent—and intentional–as you and your family prepare to commemorate the incarnation of the  Son of God and His return in glory during this season of Advent.